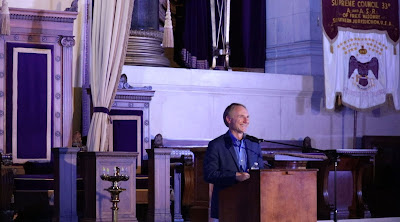 Author Dan Brown was invited to speak at the House of the Temple in Washington D.C. during the Scottish Rite Southern Jurisdiction's biennial meeting over the weekend. He posted this photo on his Facebook page on Tuesday.

For those of you who were hiding under a rock in the early 2000s (or weren't born yet – a chilling thought), Brown's art- symbolism- and history-laden thrillers The DaVinci Code and Angels & Demons were worldwide publishing phenomenons that motivated untold throngs of readers to discover the Freemasons, the Knights Templar, the Illuminati, and a myriad of other esoteric topics. Almost overnight, Scotland's Rosslyn Chapel was overwhelmed with tourists. Tour busses began cruising through the French village of Rennes Le Chateau. And internet enquiries started to come in to Masonic lodges and grand lodge offices. 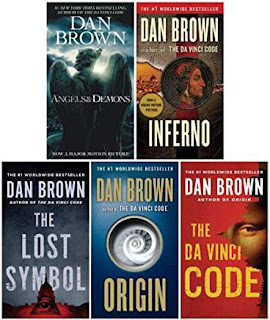 The DaVinci Code soon became the sixth most popular book in the history of the English language, and Brown's publisher teased its Masonic-themed sequel for another five years. Whether it was marketing savvy or writer's block, the delay in publishing The Lost Symbol caused an avalanche of new books, TV programs and films (like the two National Treasures) to flood the marketplace with new, mostly positive material about the Masons. 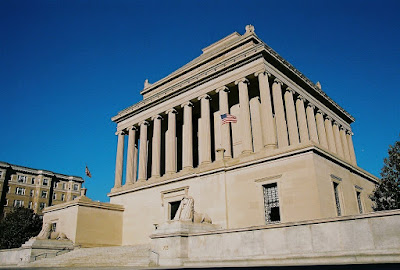 Keeping all of that in mind, it made perfect sense for the Scottish Rite to invite Mr. Brown to speak at this gathering, and in this particular place. After all of the hype and waiting, it turned out that The Lost Symbol was a 509-page love letter to our fraternity.

Its cover featured the double-headed eagle of the Scottish Rite and its motto, Ordo ab Chao. Its original hardback release date was very deliberately 9/15/09, which add up to the number 33. And the thriller's climax unfolded in the House of the Temple itself. 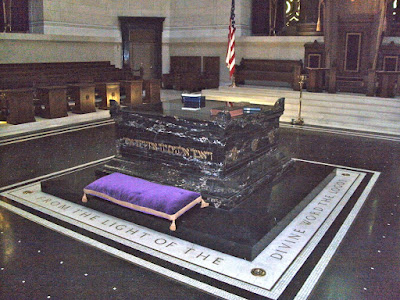 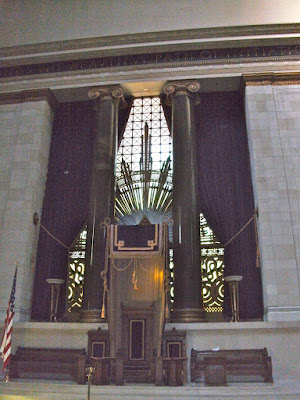 Since someone invariably asks whenever Dan Brown gets mentioned, to my knowledge he is not, and never has been, a Freemason. But even as a non-Mason, he has achieved pop culture pinup boy status with Brethren for managing to stoke unparalleled interest in all things Masonic.

While big, bloated movies with Tom Hanks were made from both The DaVinci Code and Angels & Demons, Sony Pictures skipped over The Lost Symbol and adapted Brown's NEXT novel, Inferno, instead. Masons collectively wept. For a long while it seemed that Freemasons just weren't interesting to Hollywood anymore. Our fleeting flareup in the pop culture sunlight just as quickly extinguished.

Not as fast as Dexy's Midnight Runners did, but still it was depressing.

But back in June it was suddenly reported here that NBC has given a production commitment to Langdon, a new TV drama based on The Lost Symbol and revolving around Brown's recurring symbologist character, Robert Langdon.

While you're waiting, I have this book called Deciphering The Lost Symbol…